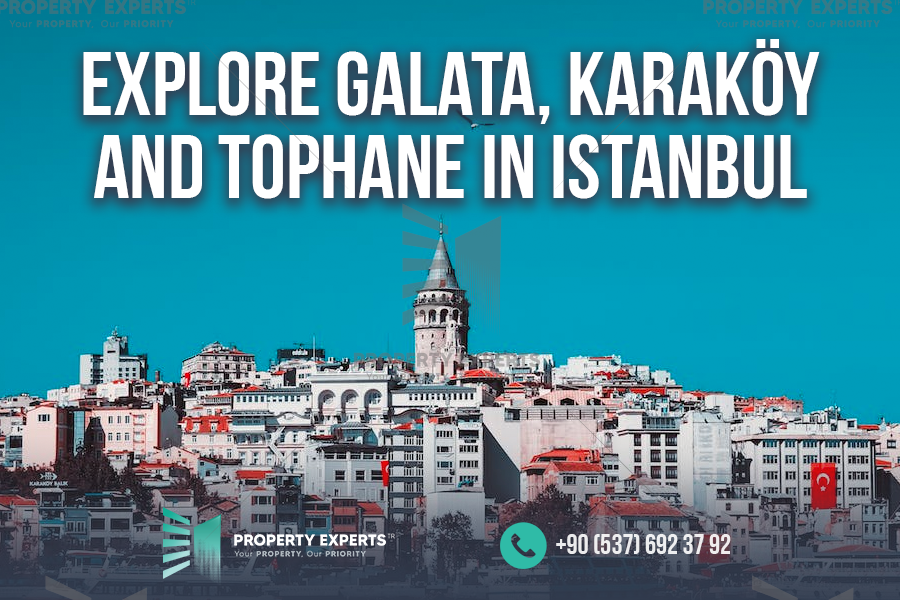 These three districts are located on the Bosphorus, at the mouth of the Golden Horn, and are all part of the Beyoglu district. They are all close to one another by foot.

A magnificent area of the Beyoglu district, Galata is full of historical and cultural treasures. It is located below Beyoglu, and the Golden Horn and the well-known Galata Tower surround it, as well as the neighborhoods of Azapkapi and Karakoy.

The Kuledibi (meaning "bottom of the tower") area, with its charming narrow streets housing a variety of lovely cafes and restaurants, is famous for its fantastic Galata Tower, which is topped with a witch's hat roof. The name of the Galata neighborhood derives from the Greek word "gala," which means "milk," and refers to the milk market that once stood on the site.

On the Golden Horn's mouth, below Galata, Karakoy is renowned for its vibrant urban life, banks, lodgings, unique cafes, patisseries by the water, street art, old studios, and boutique shops.

The Tophane neighborhood, located on the Bosphorus coast after Karakoy, was Istanbul's first industrial area during the Ottoman era. Tophane, which in Turkish means "Cannon Foundry" or "Arsenal," got its name from the cannon foundry that operated here during the Ottoman Empire. With its hookah cafés, amazing stores, and American market, Tophane now draws both domestic and foreign tourists.

Things to Do and See

There is a wide variety of attractions and sights for the travelers in the Galata, Karakoy, and Topha, from strolling along the restored colorful narrow streets around Galata Tower, the shoreline of Karakoy through Tophane, and taking in the historical sights, to enjoying your meal or drink at the variety of colorful and fantastic cafes, restaurants, bars, hookah cafes, and rooftop terraces with great views of the city, and taking a look at the extraordinary shops and boutiques.

An elegant restaurant can be found at the top of the historic Genoese tower known as Galata Tower, which looks out over lovely Istanbul. The magnificent panoramic views of Istanbul, the Golden Horn, and the Bosphorus are available to tourists.

Kuledibi (bottom of the Tower)

Visitors can spend a wonderful day in Kuledibi, a neighborhood close to the Galata Tower, by visiting its recently restored small square and one of the area's many charming outdoor cafes, restaurants, and gift shops.

The Galata Mevlevi Lodge, also known as Galata Mevlevihanesi, is a bustling location at the bottom of the Galip Dede ramp. On its expansive 6,800 square meters of space, a variety of Turkish calligraphic art pieces, musical instruments, and things related to the Mevlevi tradition are on display. The museum offers both a whirling dervish performance and museum visits.

If you ascend the Galip Dede Ramp leading to Istiklal Street from the Galata Tower area, you can find a number of excellent gift, souvenir, and music shops in addition to a few art galleries.

One of the nicest areas for strolling and shopping in Istanbul is the lovely pebbled Serdar-i Ekrem Street, which is near to the well-known Galata Tower. The area is well known for its distinctive boutiques that sell fashionable apparel, trinkets, and antiques. Additionally, you'll find a ton of real bakeries and coffee shops selling delectable handcrafted chocolate cakes.

On the Kalyon street in Galata, there is a beautiful mosque in the Gothic style called Arab Mosque. The mosque was erected by the Arabs while Istanbul was under siege. The only mosque in Istanbul that doesn't appear to be a mosque is this one. Mesa Domeniko, a chapel built on the site during the Byzantine era, was later transformed into a mosque and given the name "Galata Mosque" during the conquest of Istanbul. After being driven from Spain to Istanbul in 1942, the Arabs from Andalusia settled near the mosque, which is now known as the Arab Mosque.

Many people are curious about the structure with the strange tower that is just in front of the Galata Tower. Yes, the travelers are captivated by this amazing structure, which has a tower that resembles a giant egg cup. It is the Camekan Street location of the Beyoglu Hospital building. The structure was formerly known as the British Seamen's Hospital and was constructed in 1904. The purpose of the egg-shaped tower was to provide an excellent view of the ocean so that approaching ships might communicate if they required medical attention. The building was given to the Red Crescent by the British in 1924, and it now houses a hospital run by the Turkish Ministry of Health.

The Karakoy and Eminonu neighborhoods are connected by the Galata bridge, which is located near the mouth of the Golden Horn. Under the bridge, there are a number of cafes and eateries. A major draw is walking through the bridge, which has fantastic city views.

The Osmanli (Ottoman) Bank Museum is situated in Karakoy on the banking street. The museum has excellent collections of Ottoman-era official archives. The images of the bank branches, the orders of the palace officers, and the Ottoman banknotes are available for viewing by guests. The display of the 6000 picture bank workers' registry files is another excellent historical resource.

The first private museum in Turkey to host exhibitions of modern and contemporary art is the Istanbul Museum of Modern Art. a wonderful location for fans of modern art. features a wide range of interdisciplinary activities that include places for educational and social programs, permanent and temporary exhibition galleries, and a photography gallery.

The Kamondo steps, which were erected in the 1850s and are situated by Bankalar and Banker Street in the direction of Karakoy, are a wonderful location for taking beautiful pictures with their art nouveau architecture.

The Surp Krikor Lusarovic Church, which was established in 1431, is the oldest Armenian Orthodox church in Istanbul and is situated on Kemeralti Sakizcilar Street. It is also Istanbul's oldest known church. There aren't many churches in Istanbul with domes like that because of how lovely the bell tower and the domes are. The Patriarch Krikor II of Kayseri, who was interred near to the church wall in 1635, is the inspiration for the name Krikor.

The Saint Pierre Church, which is situated beneath Galata Tower, was constructed between 1841 and 1843. The church relocated here following the seizure of the Dominican priests of Galata, which is now the Arab Mosque (see above). The back walls of the church, which have a basilica design and a four-sided altar, were constructed inside a part of Galata's former Genoese walls.

Between the Kilic Ali Pasa and Nusretiye Mosques in Tophane is a stunning fountain in the baroque style known as the Tophane Fountain. By Sultan Mahmut I, it was constructed in 1732. has beautiful architecture as well, with flower-adorned marble walls.

On Tersane Street, near Tophane Square, is the magnificent Kilic Ali Pasa Mosque. Mimar Sinan, an architect, constructed the mosque in 1580.

The Galata, Karakoy, and Tophane regions are open twenty-four hours a day and offer a variety of dining and drinking options. The Mumhane street, which runs from the Karakoy shore through Tophane, as well as the local back alleyways, are home to a large number of excellent, delectable, amazing, and vibrant cafes, restaurants, and terraces. There are plenty of cafes and restaurants in the Galata Tower area as well.

The Galata area's Velvet and Konak Cafe, Neolokal Restaurant, Nola Restaurant, and the Guney Restaurant next to the Galata Tower;

the Karakoy Restaurants, the Mukellef Tavern, and Karakoy Gulluoglu (desserts);

Istanbul's Galata, Karakoy, and Tophane neighborhoods have a thriving nightlife. The famous areas for exciting evening activities include the Karakoy beach via Tophane and the region surrounding Galata Tower.

Regarding lodging, Istanbul's Galata, Karakoy, and Tophane regions provide a variety of options, ranging from affordable apartments, aparthotels, and residences to two to five star hotels.

Galata, Karakoy and Tophane are among the most attractions in Istanbul. It’s highly advised to visit these three places and enjoy spending time walking in the streets and doing shopping in the markets.

You may also read: Explore Istiklal Street in Istanbul.